Home
Guides & Gears
How Does Hydraulic Liftgates and Tailgate Work on Vehicles?

A Liftgate, which can also be referred to as a Tail lift, is a mechanical device which is installed permanently at the back or the rear end of a large vehicle like a truck, a lorry or a van.

It is used to load and unload freight from the ground and into the back of the truck.

In order to understand how the Liftgate works, we must understand the various parts that make up the liftgate and how they function.

When the up/down control box is switched to ‘up’, the motor start solenoid then supplies power to the motor, and the motor turns the pump, which then forces hydraulic fluid through a high pressure hose and into the cylinder.

Because of the pressure created within the cylinder, the piston is then forced out, and the forcing out of the piston leads to the rising of the tailgate platform.

When the up/down control box is then switched to ‘down’, the lowering valve coil is activated, which in turn, then draws the fluid from the cylinder and back into the reservoir.

This causes the release of pressure on the cylinder piston, and allows the liftgate platform to lower back down to the ground.

Different Liftgates work different ways, albeit slightly, depending on the type of Lift gate. They operate in the following ways: 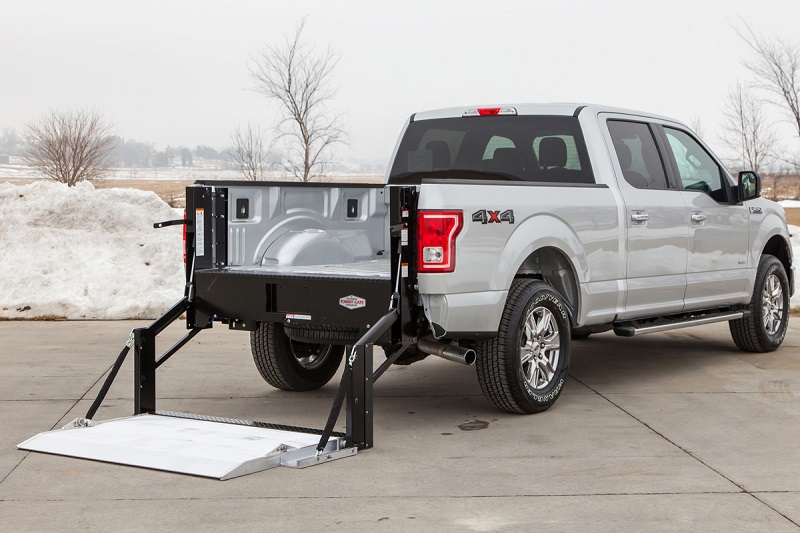 This is a type which supports lower lifting capacities and is installed on vehicle like pick-up trucks. There are two parallel bars or ‘arms’ which are attached to both sides of the lifting platform.

The way they operate is that the arms guide the platform away from the liftgate mainframe and the arms comprises of two hydraulic cylinders and the two cylinders apply force to the lifting platform.

This one operates by lifting freights on its lifting platform completely vertically, fixed at a 90 degree angle. They usually support lower lifting capacities.

Their mode of operations based on their design of their tracks which are installed vertically onto the body of the vehicle.

They are able to lift higher but a disadvantage of its operation is that their platforms only operate at a 90 degree angle from the rack. And that while using this, on uneven surfaces, the platforms will not meet the ground properly.

This kind operates in a different way, as the lifting platform can be folded and stored underneath the load bed of the vehicle, and can allow operators not to use it at a loading dock without operating the lift.

They can either be single cylinder or dual-cylinder design, with the dual design able to operate at a higher capacity by lifting more. 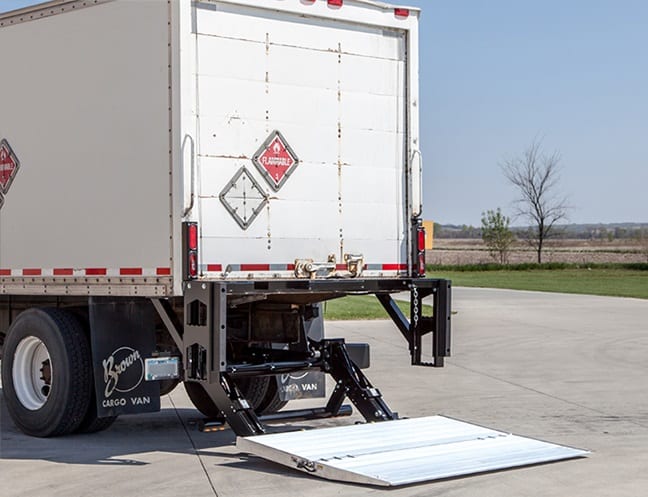 The way they work is that they have a set of rams, which are attached to the chassis of the vehicles, and the rams are on hinges, and the hinges allow them to change angles by contracting or expanding.

The rams are used in a sequence to either lift, lower or tilt the platform. The ability to tilt is a special working feature of how this operates.

They are similar and operate in almost the same way to the truckunders, as they can also be folded and stored underneath the vehicle bed.

But a special feature and way this also operates is that the platform can be slid out underneath the vehicle bed.

This king of liftgate has four posts which are all inserted at each corner, and a platform that connects to the vehicle. It comprises of a locking system that is used to position the vehicle.

This kind comprises of two posts or arms which have a rotated post design.

The swing arms are also of different varying lengths. The posts extend from the vehicle it is fixed on in  and forms a triangular shape.

This consists of two platforms which are both superimposed. With the presence of a lever which can retract and they extend in a zig-zag fashion. It has a hydraulic mechanism that allows for movement and easy operation and function.

These consist of platforms that can easily be stored under the vehicle and extends from out under or can also be unfolded in order to operate.

A hydraulic liftgate is a very useful and versatile equipment on a work truck and they are installed at the rear end of a vehicle so that goods and other cargo can easily be loaded and unloaded mechanically.

Sometimes these liftgates could be electrical and therefore it is important to maintain safety around the liftgates when it is in operation.

Tailgates are available for many sizes of vehicles, from small vans to heavy lorries, and an average tailgate can lift about 2500kg of cargo. 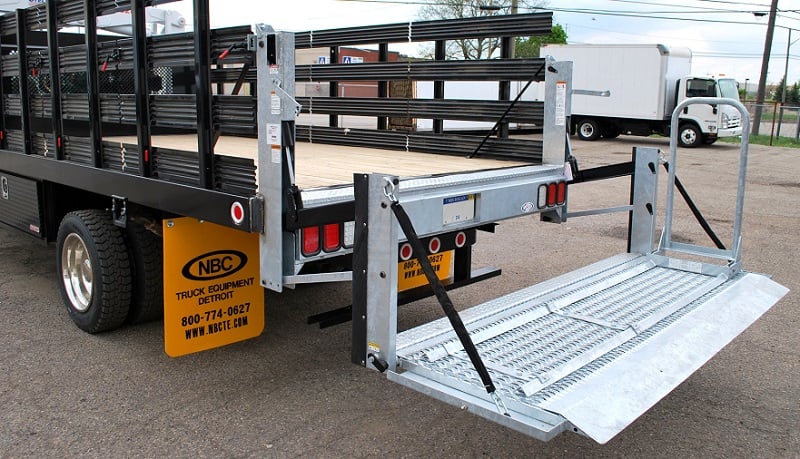