School buses are a specially designed mode of transport that are either owned by a particular school or the school area/community.

They are used to transport students or pupils to and from school and/or school activities.

They also provide opportunities for children to make new friends while giving their parents peace of mind since they know where their children are and where they will be.

But what do you know about the history of school buses?

In this article, we discuss the rich history of school buses and the advancements we have witnessed since then.

The Evolution of School buses and its Worldwide use

The first kinds of school buses were nothing like the 21st century buses. In Fact, they were more similar to wagons than buses.

They were commonly called “kids hack”. A hack being a type of horse-drawn carriage was used to carry children to school.

These hacks were made by Wayne Works, who in 1886 thought it wise to create an easier form of transportation for children.

Especially those children who walked longer miles to get to the nearest school.

In the early 20th century, the automotive industry experienced a boom which gave Wayne Works the chance to turn those school hacks – carriages – into motorized vehicles.

However, it was until 1927 before A.L. Luce built the first bus that was majorly made of steel panels.

But these buses were not yet buses as they couldn’t really protect against bad weather conditions or insecurity.

The buses were steel vehicles that had tarpaulin covers which could be rolled and unrolled.

Improvement of school buses in the ‘20s and ‘30s

Improvement to these buses continued until significant change was made.

In the 1920s, Wayne works manufactured the first set of glass windows for the school buses which would properly enclose the school bus. Thus, eliminating the curtains that were normally used.

Apart from the Wayne Works productions, other manufacturers started to build their own versions of the school bus.

A notable rival was Gillig Bros who developed a similar but different design called the ‘California Top’.

It had a roof that was reinforced by metal. It also had windows that were separated by pillars that could also be adjusted up or down.

Not long after this, Wayne works began to manufacture its first model of an all steel bus in 1930.

And soon afterwards, another competitor, Coach Crown manufactured a bus that could seat 76 passengers.

After carriages turned motorized vehicles began to be popular, manufacturing companies thought to create their own vehicles from scratch to function as school buses, using Wayne works as the top standard to beat.

But it wasn’t until the year 1939 that school buses were standardized for industrial production.

Why school buses are yellow

To discuss this new development, a conference was organised, held and led by Dr.Frank W. Cyr, who was a rural education expert.

It was attended by various key players like chassis manufacturers, transport experts, and paint companies.

This historic event is remembered as the conference that led to the change in the design and functions of school buses.

Consequently, 44 standards were adopted by all manufacturers. It included specification of uniformity in sitting adjustments, interior dimensions, etc.

This was when the color yellow was chosen as the defined colour for school buses.

The color was selected because of how visible and how easy it is to spot during a crisis or emergency.

Yellow also stands out in the mornings, during normal schooling hours, and evenings when students are returned home.

In the US and some areas of Canada, the color is officially known as the “National School Bus Glossy Yellow” and “Chrome Yellow” respectively.

Although this is the most common color to use for school buses, other countries outside the US and Canada tend to use some other shades of yellow or just add a bit of yellow to their overall design scheme. 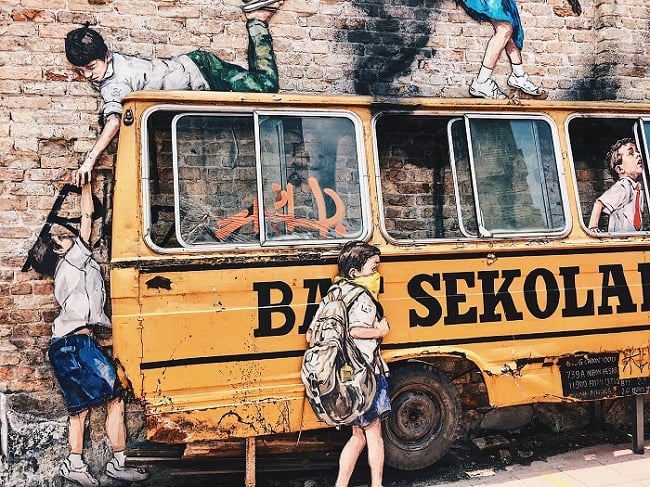 In the years that followed, the US saw a rapid growth in its population which called for the increase of school buses.

This need moved from just rural areas to urban areas and everywhere there was a school. Consequently, there was an increase in the manufacturing of school buses.

To further help the education cause, smaller buses were created.

These busses were specifically used to transport special needs children who couldn’t go through the hassle of the regular busses and routes that the longer busses couldn’t navigate through.

In the 1950s, the nation recorded the transportation of 7 million children in a total of 115,000 school buses.

It was due to this positive impact that the industry began crash testing on school fleets.

Due to the crash testing conducted, the school fleets went through some significant improvements.

One of such changes was the introduction of amber lights to show when a student enters and exits the bus.

The collapse of the school bus manufacturing industry

In 1980, the bus manufacturing industry began to collapse due to a myriad of factors.

The beginning of the decade marked the transition of the baby boomers generation into young adulthood. Most of them graduated from high school.

To further worsen the situation, the country’s economy was in recession.

And this, coupled with the decrease in demand for the production of school buses only led to the financial suffering of a lot of school bus manufacturers.

To survive during this period, a lot of school bus manufacturers went through a definite transition due to bankruptcy, liquidation, etc.

The change included ownership changes,  joint ventures, and even alignments of business between body manufactures and the chassis suppliers.

The decline continued until only six manufactures were left in business and these included;

Other bigger brands like General Motors and Ford ran out of business by 2003.

Regardless, they continued to make smaller buses (Type A). By 2005, only three of the ‘Big six’ remained in existence.

Far from the unstable hacks and windowless buses that they began as, modern school buses are quite sophisticated.

Towards the end of the 20th century, school buses that were manufactured after 1992 were upgraded with more safety methods and tools, like an extra emergency exit.

Similarly, much better mirrors that enabled the driver to see around the bus and swing-out stop arm to tell motorists that children/students were entering or exiting the bus were installed.

However, the 21st century ushered in some impressive technological advancements.

Some of the improvements aim to decrease the impact of these buses on the environment.

They include the introduction and application of the three-point seat belts, GPS technology, and hybrid buses..

Other improvements aimed at increasing the comfort and security of the commuters.

These include wifi, cameras, motion detectors, and student badges. All these are improvements that go to show how far we have come from carriage-like vehicles.

The Benefits of School Buses

The creation and continued use of school buses over the decades have only had positive impacts on most communities.

And while they might prove to be too slow for a regular commuter trying to get to work, school buses get children to and from school safely.

Here are the top reasons why school buses are a benefit to everyone.

Due to the number of students a school bus can convey at a time, it reduces the amount of cars that would be trooping to schools to drop off kids.

Every school bus removes about 35 cars from the road, leaving it less congested. This means less vehicles on the road resulting in a positive reduction in traffic.

Too many cars on the road, every day, throughout the year, produce massive quantities of CO2 emissions.

We are already well aware of the depleting impact of greenhouse emissions on the environment. 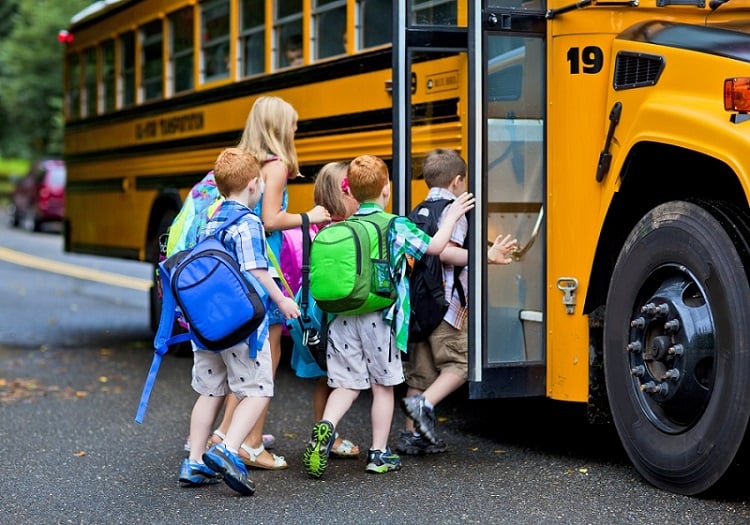 However, by reducing the amount of cars needed to convey kids to school to one, school buses reduce the pollution on the environment.

School buses have been proven to be far safer than regular cars because they were designed specifically to keep the children safe.

The color of the buses are easily visible from every part of the road.

The sides of the school buses are reinforced to make sure children are safe incase there is a crash.

Not everyone owns a car or can simply walk to school. In such cases, school buses are the reliable means of transporting kids to and from school.

The amount paid monthly as the school bus fees is significantly less than the cumulative amount that would be spent on gas every month for a private vehicle.