Also known as reefer trucks or chiller lorries, refrigerated trucks are designed to carry perishable goods when chilled for long-distance.

But what is the history of these trucks? Where did it come from? Let’s find out.

Who Invented The Modern Refrigeration Trucks?

The first mechanical refrigeration unit for trucks were invented by Frederick Jones, in 1935. He was also racecar driver and self-taught engineer.

The Use of Chiller Boxes

The history of this revolutionary mode of transport can be traced back to ancient China before the turning of the first millennium where they harvested ice and kept it in boxes to chill food products.

Later, other civilizations such as the Romans, Greeks, and Hebrews started to use storage pits that had snow and were covered with insulating materials to prevent the snow from melting.

RELATED:  What Is A Reefer Container and How Does It Really Work?

The development of refrigerated trucks that were used to carry perishable goods revolutionized the food processing industries. This enables the distribution of food like never before.

Ice was used to cool food in the first refrigerated trucks. However, at that point, it was impossible to create the ice artificially and instead was cut from pools and lakes in the winter months.

During the earlier days of mobile refrigeration, perishable items were transported using railroads.

During the mid-1800s, the Massachusetts Western Railroad tried different ways of maintaining cattle meat to ensure that it doesn’t get spoilt.

Some of the methods they tried included filling the trailers with ice.

But this didn’t work very well as it resulted in meat discoloration. In 1851, the Northern Railroad Company designed the first insulated boxcar.

However, it had a limitation in that it only worked in colder climates and weather.

It was these limitations that motivated other railroad companies to create an ice boxcar that was more functional and could work in different terrains.

One of the biggest breakthroughs in the technology happened in 1877 when entrepreneur and inventor Gustavus Swift designed a van where the air could be circulated inside, cooling the entire van and ensuring that the ice didn’t melt.

The system led to the development of the Union Stock Yard as well as the Chicago Slaughterhouses, which were then able to provide meat to the entire United States and not just the outlying districts.

In 1987, Andrew Chase developed an ice-based trailer that had a ventilation system.

The ice was put in the roof compartment, allowing the chilled air to go down while keeping the boxcar cool.

These two ice-based mobile refrigeration systems were used, resulting in the success of companies such as the Chicago Slaughterhouse and the Union Stock Yard.

On top of transporting to other areas, they managed to transport meat across the country without worrying about the risk of damage.

The Development Of Coolants

With time, it was possible to manufacture the ice but it only lasted for a few days before it could be replaced as coolants were yet to be discovered.

With time, dry ice was discovered as a coolant. It continued being used until combustion engines were designed.

The use of liquid gas evaporation started rivaling the use of various coolant systems.

With the development of better combustion engines and the development of motor vehicles, there was a decline in the use of train wagons. Due to the shorter journey times, these were replaced by the refrigerated trucks on wheels that are used to.

The Growth Of Mobile Refrigeration

The first mechanically refrigerated truck was created by Frederick Jones.

The invention enabled the shipment of food for long distances without spoiling.

There was a fast expansion of Joseph Numero, leading to the development of a new company known as Thermo King that exists up to date.

With Jones as the Vice-President, airlines, railway cars, and ships started incorporating refrigerated systems in their cars.

By the 1940s, mechanical refrigeration systems were starting to replace the ice-based transportation method.

This led to the development of mechanical mobile refrigeration in the U.S known as the Thermo Control Company.

It became possible to transport frozen goods and medical supplies like blood.

After this, truck refrigeration and van refrigeration is known as reefers were developed to support the growth of the frozen food industry.

The refrigeration unit for the trucks developed by Jones was compact and also shock-proof.

It was also automatic. He, therefore, used the self-starting motor that was patented in 1949.

The car became popular during World War 11 as it was used by the army to help transport blood and therefore, save lives.

There was a spread in the van refrigeration as farmers, food companies, and transporters started searching for methods that were more efficient to transport their goods.

They didn’t need to rely on railways and boxcars/trailers, particularly with the introduction of the interstate highway system.

Reefers started trying out different cooling methods some of which used evaporated liquid gas while others used the cooling systems.

Since the early days, the cooling mechanisms that were used then continued to improve as it was important to maintain the low temperature.

Proper temperature control and cooling are important as it helps to prevent the spoilage of freight such as ice cream, flowers, fruits, and veggies.

No matter the kind of freight being transported, it is important to ensure that that there is proper ventilation and insulation.

This means there is a need for the right temperature control during and after transportation.

It is especially important to maintain the right temperature when considering the distance that the freight needs to be taken, whether local or international.

RELATED:  Can I Put Reefer Fuel In My Truck Legally? 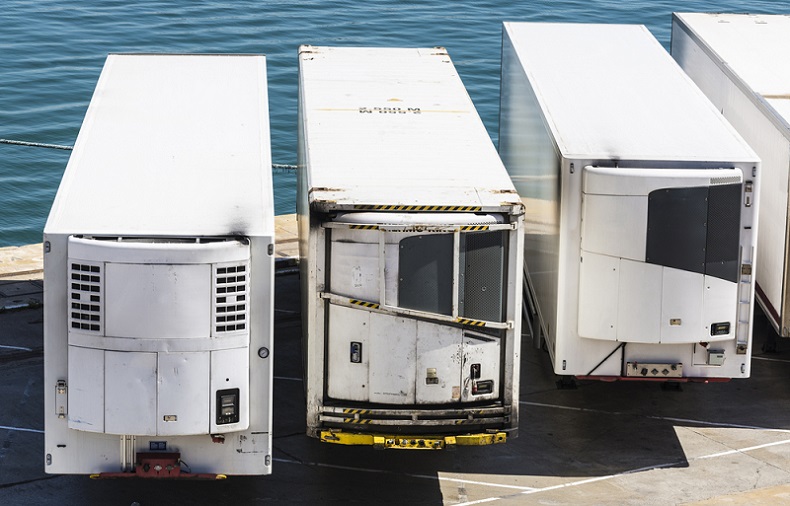 Refrigerated Systems As It Is Today

There has been a great improvement in technology. Nowadays, the materials and insulations used are more effective but all trucks have similar temperature monitoring and remote temperature control.

This enables drivers to know the condition of the shipment easily and manage any issues that may arise fast.

Trailers now have electronic door seals that make the trucks smarter and keep the cold in.

FAQs On The History Of Refrigerated Trucks

Did a black person invent the refrigerator?

The refrigerated truck was invented by Frederick Jones, a black man in 1935.

Why are refrigerated trucks called reefers?

A reefer is a slang word for a refrigerated truck that is attached to a semi-truck to haul perishables as well as other goods that are temperature sensitive. They can also work for heated goods.

Who is the largest refrigerated trucking company?

Yes. Refrigerated trucking is considered to be completely safe.